The Early Days of Liberty Orchards...

Just after the turn of the century, a young Armenian named Armen Tertsagian emigrated from the Near East to the United States, working his way from Ellis Island across the rugged continent to the infant city of Seattle. There he met Mark Balaban, another young Armenian who was visiting from England. It wasn't long before the two became fast friends and decided to venture into business together.

But life in Seattle was far from easy. Their initial business ventures-- a yogurt factory and an Armenian restaurant-- were both ahead of their time. And the gray, wet winters were difficult for people used to the balmy eastern Mediterranean climate.

So Mark and Armen packed up and headed for Eastern Washington. On the far side of Stevens Pass, nestled at the foot of the Cascade Mountains they found a valley carpeted with fruit orchards. It was here, in the fertile Vale of Cashmere that they settled, purchasing an apple farm which they named Liberty Orchards in honor of their new homeland.

Times were tough for most orchardists in 1918, so Mark and Armen searched for new ways to make use of their surplus fruit. Apple dehydration seemed a logical first move and, coinciding with the onset of World War I, Northwest Evaporating was born. This new enterprise not only assisted the local farmers, but helped the war effort by providing "an apple a day" for the boys "over there". Other successes for Liberty Orchards included "Applum"- a delicious jam made from apples and plums, and a local cannery named Wenatchee Valley Foods.

The cannery, Mark & Armen's main business in the 1930's and 1940's, grew so rapidly that Mark's nephew, John Chakirian, was invited to join the company. During that same period, another use for surplus fruit occurred to Mark and Armen. Why not use apples to make Rahat Locoum, the popular near eastern candy they had loved as children? After much "research and development" on the kitchen stove, they perfected a delicious apple and walnut recipe. The candy was an immediate success, and soon Armen began traveling throughout the Pacific Northwest selling the "Confection of the Fairies," also known as Aplets®.

A few years later Cotlets®, made from apricots and walnuts , was introduced. Before long, people were sending Aplets & Cotlets to faraway friends and relatives as gifts from the Pacific Northwest. Gift recipients, unable to find the candy in local stores, began writing to Liberty Orchards to order more. A thriving Mail Order Department was born which continues to this day.

During World War II, sugar was a rationed commodity and Aplets & Cotlets became a "batch here, batch there" operation. But since food was a big part of the war effort, Mark and Armen concentrated on canning. When wartime hostilities ended in 1945, the cannery was sold so that Liberty Orchards could concentrate on the candy business. About the same time Ankin, Armen's oldest daughter, married Dick Odabashian, an airline flight captain, who also joined the firm. Dick logged countless flight hours promoting Aplets & Cotlets across the nation.

Armen Tertsagian passed away in 1952 and Mark Balaban four years later. Their legacy was passed on to John and Dick, and Liberty Orchards continued to grow and prosper under their guidance. Then, in 1962, the Century 21 World's Fair came to Seattle. Hundreds of thousands of people from outside the Northwest were introduced to Aplets & Cotlets, which led to a huge increase in sales. In 1974, Grapelets® were introduced to the growing lineup of Liberty Orchards confections and became the "official candy of Expo 74".

In the years that followed, Liberty Orchards continued to promote their candies throughout the United States. Earlier marketing efforts consisted primarily of booths in World's Fairs across the nation, and prize-winning parade floats. When John Chakirian and Dick Odabashian approached retirement, they invited Armen Tertsagian's grandson, Greg Taylor, to join them for a third generation of family management.

In recent years, Liberty Orchards continued to expand their product line and adapt to an ever-changing market. In 1984 Fruit Delights® was introduced, which is a delightful melody of various flavor and nut combinations. With such tempting flavors as Strawberry, Raspberry, Orange, Blueberry, Peach, and Pineapple, Fruit Delights quickly became as popular as Aplets & Cotlets. Other tempting candies have also been created, including Chocolate Delights®, Hawaiian Delights®, and Cranberry-Aplets®.

Today Liberty Orchards has grown to be a genuine Northwest tradition. Each year we welcome 80,000 visitors to tour our Candy Kitchens and visit our Country Store. And when they do, they don't find a large, impersonal factory... they find townfolks making and packing Aplets & Cotlets much the same as Mark and Armen did all so many years ago. 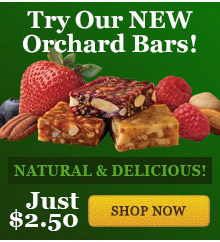 We value your opinion!

Take a short survey to tell us
how we're doing!